The Politicisation of Culture?

This summer, the European Parliament officially opened the House of European History. The motives behind this project have been to capture the common experience of Europeans during the 20th century. And, indeed, as the European Parliament has noted, until now, there has been no museum which has managed to bring together these juxtaposed, yet shared, European experiences which eventually gave way to European integration. This has not silenced the projects detractors who have called the museum an expensive vanity project by the Parliament (its price tag was over €50 million) and entirely unnecessary (the Parliament already has a visitor’s centre and history exhibition, the Parliamentarium). Some critics have gone as far to say that it is a ‘House of Propaganda’ and a revisionist project. Despite the pros and cons of this museum project, it does raise interesting questions about the use of historical heritage by political bodies and organisations.

The House of European History is not the European Union’s first foray into culture and heritage. Over the years, the European Commission has been putting more and more emphasis on culture across the Union. Arguably the most visible and successful of these has been the European Capitals of Cultural project. Now over thirty years old, the project was initiated to highlight the cultural wealth of various European cities and foster cultural development for the cities and their citizens. The project has been credited with assisting urban regeneration, raising the international profile of each respective capital and (more importantly to some) diversifying streams of revenue: generating much needed income for the cities in the form of tourism. The Capitals of Culture Project is not the only initiative and the Commission has, since 2007, spent over €3.2 billion on heritage projects across the EU (2018 will be the first European Year of Cultural Heritage). In 2018, citizens will be invited to explore the cultures and histories of their own respective countries, as well as their neighbours and Europe as a whole. Furthermore, citizen are being called upon to reflect on what culture means to them, and examine how we can protect, sustain and develop heritage and culture. As the project is being managed on the ground by each respective Member State therefore citizens’ involvement will vary from nation to nation.

While these monetary figures and projects pale in comparison to the cost and size of the House of European History, they do raise interesting questions about how culture and heritage is used across the Union, and for what purpose? For example, the 2017 opening of Gdansk’s Museum of the Second World War came into criticism from Poland’s nationalist Government for failing to be ‘Polish’ enough. The Government, in criticising the new Museum’s international perspective, has sought to realign the new Museum with another museum project in the city, with the aim of establishing a more nationalistic tone in the Polish historiography of the Second World War. It remains to be seen whether the Government will be successful in its aim to reposition the Museum’s perspective, but Poland is certainly not the first European country to have cultural projects planned or developed (or manipulated) directly by a government. The grands projets of President Francois Mitterrand of France resulted in criticism from many of his detractors. The Socialist president’s ambitious projects, such as the Opera Bastille and the Louvre Pyramid, drew parallels with the reign of absolutist King Louis XIV and the construction of his magnificent palace at Versailles. Regardless of the vanity of the President, it is true to say that French Governments’ have traditionally taken a strong role in leading artistic and cultural projects in the State. For instance, Mitterrand’s Culture Minister, Jack Lang, famously pioneered the Fête de la Musique, an annual amateur music festival which has now become a key part of France’s summer calendar. So, while the cost and size of Mitterrand’s projects certainly raised eyebrows, his ‘hands on’ approach should not be considered entirely surprising. 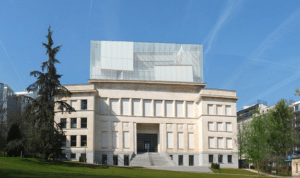 This can be seen in contrast to a ‘hands off’ approach to culture taken by the British Government, for instance, who tend to fund various cultural initiatives through semi-state agencies, rather than directly from Cabinet Ministries. While this laissez faire approach is welcomed by some for allowing a more independent and vibrant arts and cultural sector, it has also received criticism from others who feel it leaves the sector reliant on private and unreliable sources of income. Some see the British Governments ‘hands-off’ approach as a reason behind the loss of cultural property from the UK, with underfunded museums unable to compete with overseas private buyers in search of cultural property. Certainly, while the loss of cultural property via the art market is lamentable, the British Governments determination to remain an independent arbitrator of the state heritage and culture is admirable.

What next for Europe and Culture?

And this brings us back to our original question, how much further into the realm of culture and heritage should the European Union venture? While European culture (if such a thing can be said to exist) can be invariably contrasting, as well as complimentary, the diverse examples of cultural management that currently exist across Europe already pose questions for the Union as to how it should (or could) manage and direct culture, let alone what type of cultural story it should tell. While Europe has been active for many years in the cultural arena, the House of European History demonstrates an interesting new step for the Union, and the Parliament, and a more nuanced approach in telling the story of the Union. Such a bold step can perhaps explain the criticism it received for commissioning in the Museum in the first place, and the success of the museum will determine the Parliaments next move. With the wind back in Europe’s sails, as said recently by Jean Claude Junker at the State of the Union address in September 2017, it seems likely that we can expect more active forays in the cultural sector in coming years by the Parliament.

By Amalia Verzola Macron, “un enfant prodige” at the Elysée Palace Young and…

The recent destruction of the Mosul mosque by Daesh has once…