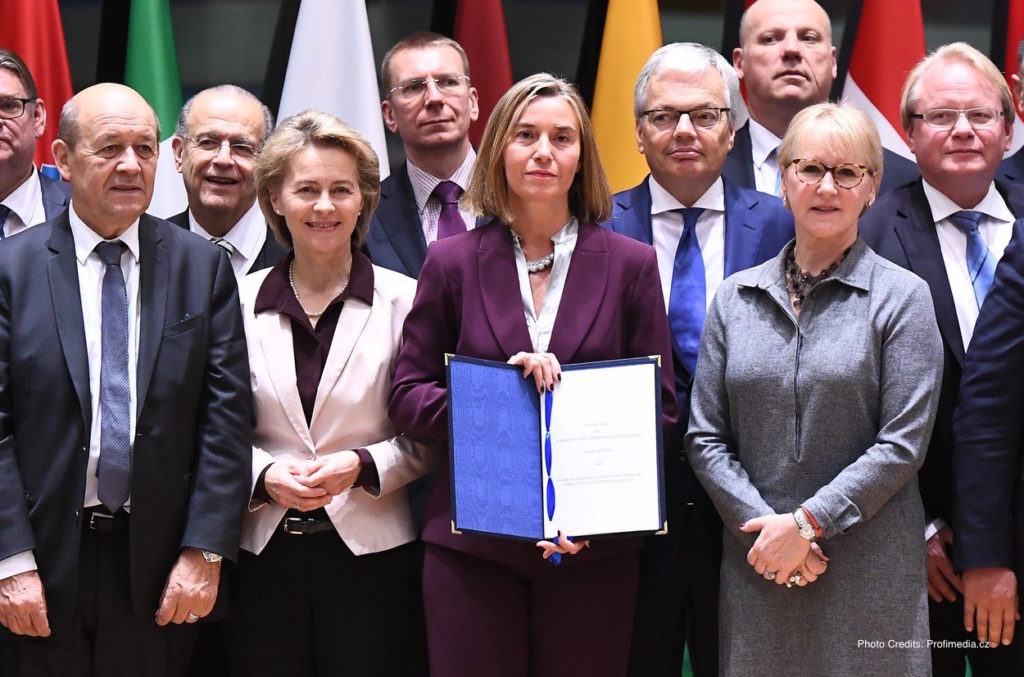 On 13 November 2017, 23 Member States[1] signed the joint notification on Permanent Structured Cooperation (PeSCo) – established by the Lisbon Treaty in 2007 – and handed it over to the High Representative and the Council, beginning an institutionalized cooperation in the field of defence and security. While this may not yet be called a “defence union”, it still represents a first step in creating a basis for the Union’s missing hard power: it is in fact the first EU-led initiative to create a point of civilian and military convergence for Member States, and to better integrate their armed forces.

PeSCo is an instrument that allows voluntary Member States to bring up, discuss, and join concrete defence initiative and projects; in other words, a permanent and institutional framework to work together in operations that before would have required bilateral and/or multilateral agreements among MSs individually. PeSCo is essentially a facilitator for military and civilian joint operations under the name of the European Union. It is established by Articles 42(6) and 46 of the Treaty on European Union (TEU), and by Protocol (No 10) to the Treaty. In a nutshell, these provisions allow “willing” Member States “whose military capabilities fulfil higher criteria” and which have made “more binding commitments with a view to the most demanding missions”, to join in the area of security and defence. Together, participating Member States will work on the issues of defence spending, unequal capabilities, quick implementation of forces, filling the defence “gap”, and work closely with the European Defence Agency – Protocol 10’s five commitments.

The reason why we can’t speak of a proper defence union is because Member States – through the Council – will continue to preserve sovereignty over their armed forces and, most importantly, will retain decision-making power on the selection of common projects to undertake; PeSCo Secretariat and the High Representative will have coordinating roles by managing the annual assessment of the cooperation, and advisory roles by recommending projects in line with EU interests. Nevertheless, this represents a big step forward for European defence and security.

“We are definitely turning to a historic moment in European defence” stated High Representative, Federica Mogherini, at the signing ceremony. It is certainly true. With PeSCo, the EU can finally sponsor military operations that are on the interests of its Member States, thus complementing its well-known soft power with a preliminary hard power instrument. That is crucial in the context of the role of the European Union in terms of world power because it is a response to the aspect for which the EU has been widely criticized: the lack of a military force accompanying its economic and normative tools, which, as we have seen in the cases of the Libyan and Syrian civil wars, and the Crimean Crisis, have their limits in solving emergencies. To accomplish that goal, rather than creating an “EU Army”, the Union is working on bringing individual armed forces to a common high standard, higher spending, higher coordination, and joint operations. In other words, the EU is working on the necessary conditions to eventually arrive at an EU common defence at later stages. So, practically speaking, PeSCo results in a strong political and military response to the evolving international security situation: EU’s hard power is coming.

Why did this response only come ten years after it was conceived? The answer lies in the totally different perspective in terms of international security that Europe faces today compared to ten years ago. On one side, Trump’s America pushes for greater isolationism and less involvement in military operations worldwide, together with continuous criticism on NATO and its members for not spending enough on defence budget. On the other side, and ever-threatening Russia, accused of showing an antagonistic behaviour towards its western neighbours by engaging in hybrid warfare against the west, invading Crimea followed by a dubious referendum, and by interfering with elections. In addition, the UK’s decision to exit the European Union has taken away from the equation a strong opponent of European common defence projects, allowing PeSCo to see the light. Finally, on a more practical note, over the last ten years, Europe has faced a disastrous financial crisis which has naturally pushed defence affairs at the bottom of the agenda. All these reasons opened up the possibility for the EU to take a big step forward in defence and security.

The EU was said to be at a crossroad after Brexit: disintegration or further consolidation. The signing of PeSCo is a strong argument for the latter because it brings together an aspect that was never accomplished before: military integration. Something of this kind was already tried 60 years ago, with the Pleven Plan (establishing the European Defence Community), but it failed because Member States feared of losing their sovereignty. Now the situation is different. The EU is integrating further in a very delicate area, showing that, while there may not be the conditions to create a Defence Union yet, there is definitely the will and the plan to start laying the foundation for an EU’s hard power instrument.

[1] All Member States except for Denmark, Ireland, Malta, Portugal, the UK