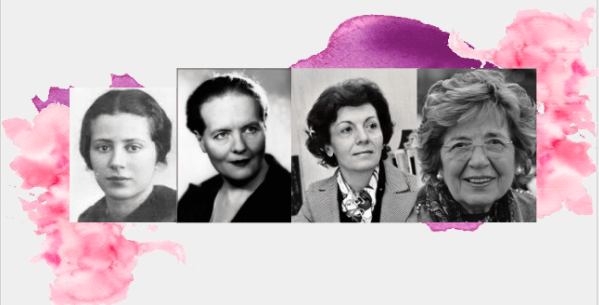 May has two important dates for us: Mothers day (varies by country) and Europe’s Day (9th of May). So we what better way to honour both dates than to shine a light on the heroines that have contributed to the process of the creation of what is now the European Union. We have heard of the founding fathers of Europe, those politicians who have shaped the European Union’s history by committing themselves to the creation of a peaceful economic project in 1950. This is why we need to ask ourselves: Who are the “Mothers of Europe”?

There might not be any formal “founding mothers of Europe”, but there are women deserving of the title that have poured their heart and political skills in the shaping of the EU and actively contributed to its construction.

Structural social norms constrained women in the early 1900s, but some managed to shy away from them. We start our list with Ursula Hirschmann, a German advocate for European federalism, and is the driving force for the Ventotene Manifesto, the first sketch of the European Union.  At the age of 20 in 1935, she married philosopher Eugenio Colorni, who due to his socialist and anti-fascist ideas was sent to confinement on the island of Ventotene. Here  Ursula and Eugenio along with two other prisoners co-authored the manifesto for a “free and united Europe”. Ursula, who could move freely, would bring pieces of the manifesto to the mainland hidden in cigarette papers inside a tin box to circulate among fellow resistance comrades.

Between the great wars, journalist Louise Weiss voiced her unwavering commitment for a more unified Europe for over sixty years. In 1918, at 25, Weiss founded “L’Europe nouvelle” with articles written by leading political and academic names, dealing with economic, diplomatic and literary issues. The publication was brought to an end in 1934, but she continued to actively voice the need for reconciliation and pacification (especially between France and Germany). Weiss became a renowned politician in her own rights and became a member of the European Parliament aged 86 in 1979 for the Gaullist Party (now The Republicans) where she remained until her death 1983. She devoted her whole life to the construction and unification of a peaceful Europe. While she did was not part of the founding fathers of Europe, she was the first generation of female politicians to be actively involved in it and pave the way to women in European politics setting an early example to women across Europe.

Fausta was a pioneer, who through her civil society organisations and networks helped reduce the gap between EU institutions and citizens in the field of gender equality. In 1977 she founded the “Women’s Information Service” of the European Commission’s Directorate General for Information and launched “Women of Europe” a monthly information bulletin that became a sort of a newsletter for women movements in the member states.

Known as “Mother Erasmus”, it is thanks to Sofia Corradi that over 5 million students can study a year abroad. Sofia was the driving force behind the Erasmus Program (which stands for ‘European Region Action Scheme for the Mobility of University Students’, and not due to Desiderius Erasmus as once published on Wikipedia).  Corradi was inspired after studying in America in 1957 and observing student mobility across the country. Since its creation in 1987 the programme has extended to apprenticeships, staff and volunteering opportunities and is considered one of the major successes of the EU.

Without a shadow of a doubt, we can conclude that Ursula, Louise, Fausta and Sofia have significantly shaped the construction of the EU.  The contribution of women to the notion of Europe and to the European construction process has therefore been important, and during certain episodes most likely decisive.

We are living in a time of political and structural change, and while we might take for granted women in politics today, we must not forget that there was a time where their exertion over decision-making was limited, if not almost nil. These women have fought to go against what society expected of them and paved the way for other women to be able to claim their place in the political arena without their capacity being questioned due to gender. Although it is not a question of inflating their contribution compared to that of men, it should nevertheless not be forgotten.