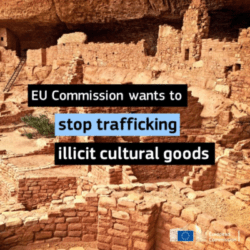 The recent destruction of the Mosul mosque by Daesh has once again focused the attention of the international community on the protection of cultural heritage. The destruction of sites such as these is usually followed by a wave of revulsion, but it is a symptom of a greater malaise: the illicit trafficking of cultural property to wealthy, market countries, including many European Union member states. To get a sense of the scale of this problem, on a global level, Dr Neil Brodie of Trafficking Culture has estimated that these black market activities (the looting, smuggling, trafficking and selling of cultural goods and antiquities) are worth up to $2 billion annually. This is second behind the trafficking of weapons and drugs.

Many states have developed sophisticated responses to the thieves and looters, dealers and buyers, who threaten cultural property. For instance, the Italian Carabinieri Command for the Protection of Cultural Property is regarded as one of Europe’s most advanced and successful law enforcement units geared towards protecting cultural heritage. Indeed, they are regularly called upon by other European and non-EU states to offer their expertise and advice in the protection of cultural heritage worldwide. Owing to Italy’s rich cultural heritage and as the inheritor of a wealth of treasures from the Roman period, their knowledge in this field should not come as a surprise. However, as the above figure demonstrates, this is a transnational problem, and therefor it needs a transnational response.

Let us take for example the case of Cyprus, an EU member. While it is commonly know that the island has been divided for more than fifty years, less known is the threat facing many culturally rich locations across the island. Following the division, many of these culturally rich sites were deserted by their original inhabits. Subsequently, they became victim to many unscrupulous individuals who looted (and continue to loot) these sites for their own personal gain. Many items from Cyprus have ended up at (illegal) art markets and antique auctions in Western Europe (and further afield). Many individuals have been campaigning to protect the historic sites of Cyprus, such as Tasoula Hadjitofi and her organisation Walk of Truth. But, we must not assume that this is a new phenomenon effecting just Cyprus. It is important to recognise that the re-appropriation of culture has often been used as a tool of conflict (take the open air book-burnings used by the Nazis, for example); for thousands of years victorious occupying forces have looted religious buildings or museums to take their cultural goods as trophies or spoils of war (again, take for example the Arch of Titus in Rome, with its illustrations of Roman soldiers taking spoils of war from the Jewish Temple in Jerusalem in 70AD, or more recently the looting of the Baghdad Museum in 2003 following the Coalition invasion). However, we must recognise that it is not during times of war that cultural property is at risk, in fact, the market for these cultural goods normally encourages looting in safe, peace-time zones. Additionally, while countries like Italy and Cyprus have resources necessary to protect cultural heritage, to the best of their ability, the same is not true of other heritage rich nations, who do not always possess the bureaucracy needed to monitor this trade.

A brief article like is not enough to delve into this complex problem, but it can help illustrate (albeit briefly) the challenges facing us as we struggle to protect our common cultural heritage. What is clear, however, is that a common international response is needed to address this international problem. The EU has recognised these challenges and the European Commission has been increasingly active in this field. One of the most important tools at its disposal is the recent Directive 2014/60/EU on the return of cultural objects unlawfully removed from the territory of a Member State. This tool, coupled with Regulation (EC) No 116/2009 on the export of cultural goods, is designed to regulate the movement of cultural property throughout the Union. Recognising the added dangers facing cultural property, the European Commission also placed bans on the movement of certain cultural items coming from Iraq and Syria. The Commission has also been working closely with the International Council of Museums’ International Observatory on Illicit Traffic in Cultural Goods to help raise more awareness of this practice, and help fight it.

While these are welcome steps, more action is needed. The Directives and Regulations are only specific to cultural heritage in Europe, and the Iraqi and Syrian embargoes (unfortunately) came too late to stop most of the damage. In the opinion of this author, these legal and legislative tools can be recognised more so as grand political statements on the part of Brussels, rather than constructive measures to deal with the looting and dispersion of cultural property. Heritage is part of our common European identity, and many of us share a mutual ancestry and history, tracing our languages, cultures and even democracies back to the Roman period and beyond. While Brussels is taking more steps to protect our common cultural heritage, it is clear that more work is needed. The illicit trafficking of cultural property is a transnational problem, which needs a transnational response. And the EU is well placed to become a more active and assertive actor in this blight.  If we are serious about strengthening our Union, then protecting our heritage must be recognised as an important part of this project.

Does Europe Need a Year for Cultural Heritage?

Shortly after coming to office in 1981, President François Mitterrand of France…